How Covid-19 induces smell loss, and why some people take so long to recover

Sandeep Robert Datta, Professor of Neurobiology at Harvard Medical School, is a leader in the field of olfactory research and the lead author on an influential paper that identified the role of sustentacular cells in Covid-19 smell loss. When they met in Boston, Chrissi Kelly took the opportunity to ask him to explain the findings. 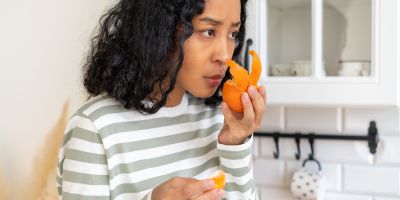 Bob explained that his life’s work has been understanding the basic biology of the olfactory system. How do cells detect odour? How do they interact? How does the brain interpret odour? So when coronavirus caused so much disruption to the sense of smell, he and his colleagues had some good ideas about what might be going on.

We detect smell through the olfactory epithelium [eh-puh-thee-lee-uhm]. This is a membrane of cells layered high in the nose, made up of several different types of cells doing different jobs. Olfactory sensory neurons (OSNs) within the epithelium detect molecules and send a signal to the brain, but they don’t act alone. They are embedded within different types of support cells including mucous producing cells and sustentacular cells which prop up the OSNs and ‘feed’ them to keep them healthy.

The data provided a clear picture. Original concerns that the virus attacked OSNs was discounted. OSNs don’t express molecules required for infection to enter, but sustentacular cells do express ACE2. This is the protein expressed by cells that allows coronavirus to hook into host cells. The team concluded that the virus attacks smell through sustentacular cells and that has consequences for the rest of the epithelium. The attack on these cells disrupts the whole epithelium and neurons die without their support system.

This could be why there are two different experiences of smell loss. In around 80 percent of patients, smell returns between two and six weeks after infection. One idea is that sustentacular cells get infected and die, but don’t damage neurons. Smell comes back as the sustentacular cells they recover.

However, in the 20 percent of people left with persistent smell loss, it could be that more severe damage to sustentacular cells might affect the adjacent neurons more dramatically. Then the neurons as well as the sustentacular cells need to be replaced. Fortunately, OSNs are stem cells and they are designed to regenerate. But this doesn't happen quickly: it can take weeks, months, or years.

Having answered the question of why smell was so frequently affected by Covid-19, attention turned to why recovery took so long in some patients.

The findings revealed there was no large-scale persistent infection; that is, Covid-19 was not lurking in the nose months after the initial infection. They also saw no massive inflammatory response that could be interfering with function. And they saw that many patients had plenty of OSNs to be able to detect smell.

What they did find was that the patients’ immune system appeared to be ‘camping out’ in the nose.  They found noses filled with immune cells; those cells set up to combat the covid infection. There was evidence of some persistent process at work that encourages T cells to take up residence in the nose. Referring to work that suggests OSNs are sensitive to inflammation, the suggestion is that these neurons are turned off when they come in contact with immune response cells.

Bob was quick to underline that more evidence is needed, but this initial exploration has provided a very important first look. Bob expressed his deep gratitude to all the patients that were involved, without whom this leap in knowledge would not have been achieved.

You can listen to the entire conversation on our podcast here.

Read our blog on Bob Datta's explanation of brain elasticity and smell training.

Read the neurobiolgy view of smell, emotion and memory.

Your plastic brain is the reason smell training works

What role does smell play in our mental wellbeing?

How Covid-19 induces smell loss, and why some people take so long to recover

Harvard's Bob Datta shares his insight.
Sign up for our monthly e-Newsletter for events and news about smell disorders