An interview about the care of your nose with Dr. Basile Landis of Geneva, Switzerland

CK: Hi Basile, Please tell us a little about yourself and your work with anosmia:

BS:  My name is Basile Landis and I am currently working in Geneva Switzerland. I am head of the Rhinology Dept and we created a smell and taste outpatient clinic more than 20 years ago. While I am primarily interested in smell and taste, I also deal daily with other, more classical rhinological problems such as diagnosing blocked noses and doing the surgery to correct the blockages.

CK: What can you tell us about the nose?

BS: I really stress to all my students that the nose is an organ - the organ of smell and also the organ for breathing. Dermatologists tell us that the largest organ is the skin. The skin acts as a protective layer between the outside world and the inside of our bodies, is responsible for our thermal regulation, and protects us against outside aggression. The nasal mucosa is pretty much the same. It is a layer between the space where you inhale and the inside of your body. So this mucosa, the skin on the inside of your nose, is an organ and does a lot of things like moistening, cleaning and warming the air you inhale, to prepare it for the lungs.

As a simple example, if you breathed through your mouth all day as compared to breathing through your nose, your quality of life would be quite different. Breathing through the mouth dries the tissues of the mouth cavity and throat. If you inhaled all day through the nose, you’d be more comfortable. It’s essential for humans to have a healthy good working mucosa for wellbeing and quality of life.

CK: What happens when you have a stuffy nose?

BS: Your nose will feel stuffed up if the mucosa is swollen or dried out. About 15% of the population have a chronic problem of dysfunction of the nose of some kind. A stuffed up nose is a problem because it makes it harder to prepare the air for the lower airways, and, since it is the sensory organ for smelling, it makes it harder to detect threats like smoke. The sensory system that detects threats is the trigeminal system which is governed by the trigeminal nerve. It’s the system of touch for the inside of the nose. For instance, if the air is causing burning, stinging, prickling, like after sniffing pepper, that is potentially harmful and you should not inhale. The nose detects that.

CK: So then the trigeminal system is different from the olfactory system?

BS: Yes. The olfactory system is used for odour and flavor detection - through retronasal olfaction - but the trigeminal system is mainly for detecting threats. Examples of this are smoke, chemicals containing bleach or other hazards, but also some food items that are not dangerous like ginger and chili.  The eyes also use the trigeminal nerve. When you cut onions, you may have teary eyes and start sneezing or have a runny nose, for instance. That’s because onions contain an aggressive volatile compound. And this system also generates reflexes. For instance if you breathe in pepper, you will cough or sneeze.

CK: Is this what makes menthol inhalers work?

BS: Normally, inhaled air creates resistance with the mucosa and this creates a touch feeling. When you inhale, although you don’t think about this consciously, the brain creates a feedback loop which tells how much air you are experiencing--free airflow makes us feel comfortable. Using a menthol inhaler artificially stimulates the trigeminal nerve and gives you the impression that more air is passing over the airways in your nose and this gives you the feeling of comfort. But this is only an impression. Menthol inhalers do not “free up” your upper airways.

CK: Many people feel very distressed with a blocked nose and overuse nasal sprays. What happens when people get addicted to nasal decongestant sprays?

BS: The skin layer in the nose, can be thicker or thinner, depending on whether the nasal mucosa is congested or not, like a swollen lip. But in fact, the nose always naturally has a slight swelling. The swelling is in a cycle. There is always one nostril that is more blocked and another less and this switches every three to four hours.  That’s what we call a nasal cycle and everyone has that.

If you take a decongestant spray you are widening the openings in the nose and increasing the airflow. The molecules in these decongestant sprays act on the blood vessels in the mucosa. The blood vessels become very small and less blood flows and then they become less swollen. If you put menthol in your nose, the swelling does not change, but the feeling does. The blood flow contributes to swelling, but it also provides nutrition for the mucosa. So if you decrease the blood flow, you are also depriving the mucosa of its nutrients like oxygen. Eventually the mucosa will dry out and become unhealthy. It’s like having a lawn that you don’t water. It dries it out. It’s dangerous to take these sprays on a regular basis.

Also, the decongestant chemicals in your nose pass into the blood stream and make the blood vessels elsewhere contract and create high blood pressure. So sometimes we have people who have high BP because of misuse of these drugs. There can be a very bad rebound effect if you stop using these. Your mucosa will be swollen more than they were originally and make you want to use the decongestant more.

CK: How can this cycle be stopped?

BS: You have to be motivated and willing to tough it out for a short period. You can lower the suffering by giving a low dose vaso-constricting drug designed for children. Your ENT might also be able to help you with steroids.

Also, in general, most people use too many sprays. Use only one spray and not three. To end an addiction, first lower the dose, then stop altogether.

If you still have an obstruction after quitting, you may need surgery.

CK: Is there anything other than nasal decongestants that you could use to stop the stuffiness?

BS: A good rule is to not put anything into your nose that you wouldn’t put into your eyes. Anything that is an irritant will cause congestion.

CK: Thank you Basile, it is always a pleasure to speak with you. 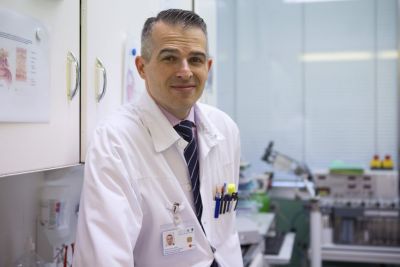