The latest research into brain function and smell 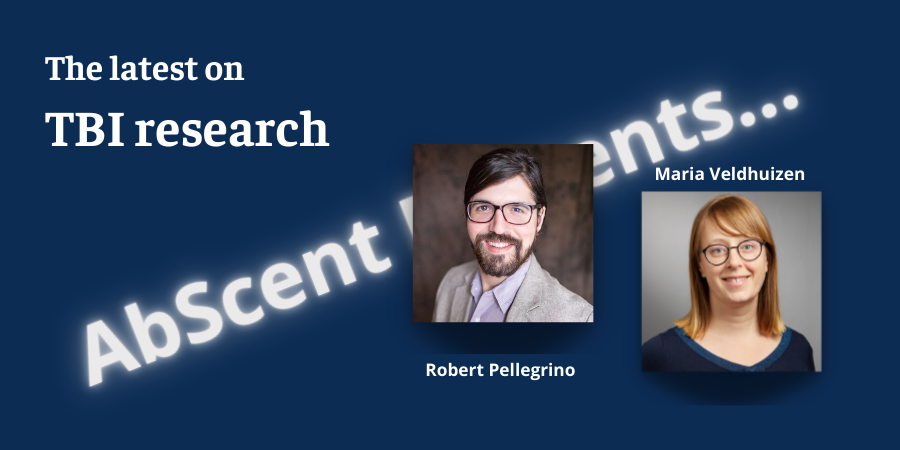 Robert Pellegrino of the Monell Center and Maria Veldhuizen of the University of Mersin have been investigating how smell loss shows up in the brain in TBI patients, and they shared their surprising findings in our webinar on 20 April 2021.

One in four patients who suffer a traumatic brain injury (TBI) will lose their sense of smell, making TBI one of the most common causes of anosmia. Some patients will recover their sense of smell - usually within a year or two; some will have permanent smell loss as a result of TBI. As yet, doctors are not able to predict which way that will go for anyone.

Robert and Maria wanted to look beyond the physical causes, and see how TBI affects the way the brain processes smell. Their study used three groups of patients: those with no ability to smell (anosmic), those with a reduced ability (hyposmic) and a group that had a normal ability to smell (normosmic). Using an fMRI scan to see the areas of the brain that activated when the patient was given a puff of scented air, they were able to observe some unexpected responses.

The first response to take them by surprise was seen in the first area of the brain involved in the smell process - the piriform. They expected to see the normosmic group display a high level of activity when they smelled something, dropping off to very low activity for those with no ability to smell at all. In fact, they saw the same response in all three groups. Whether a person could smell or not, the piriform was registering the presence of the smell.

The second surprise was in the medio-dorsal thalamus -  responsible for recognition, among other things - and the ventral-medial prefrontal cortex. This part of the brain is usually associated with risk and fear and inhibiting emotions. In these two areas, the researchers did see a difference in response. However, it was the people with little or no ability to smell that showed the most activity.

What can this mean?

So much research raises more questions than answers, and this study is no exception! What Maria and Robert observed suggests some areas for further research, rather than giving a definitive answer.

In the case of the piriform, their observations suggest this isn’t the most important part of the process that we recognise as smelling. This area can be healthy, but damage elsewhere prevents the ability to smell.

The unexpected behaviour in the secondary areas could actually indicate the absence of smell. Among the multiple functions of the ventral-medial prefrontal cortex is its role in the ‘wandering mind’ - that time when unstimulated thoughts go their own way. Maria and Robert think this could indicate that no smell signals are getting through, and left in a bit of a vacuum, the patient's thoughts wander.

We are still a way off being able to predict the chances of recovering smell following a TBI, but these small steps in understanding what happens in the brain in the presence and absence of smell is all part of a bigger picture. We need much more research involving many hundreds of patients before we can reach the ultimate goal of being able to say whether smell will return in any one case.

You can watch the whole webinar here on the AbScent YouTube channel.

Summary of the paper considering the prospects for new treatments for smell loss, published by…

The Patient’s Guide to CRS

Best practice for the treatment of CRS shared with doctors and patients.

Finding pleasure in cooking and eating

Smell disorders can take all the pleasure out of cooking and eating. This free recipe book gets you…

Covid-19 has highlighted the need to treat smell disorders seriously.

New research investigates how biologics could help patients with CRS.