What we smell comes down from the brain rather than up through the nose. 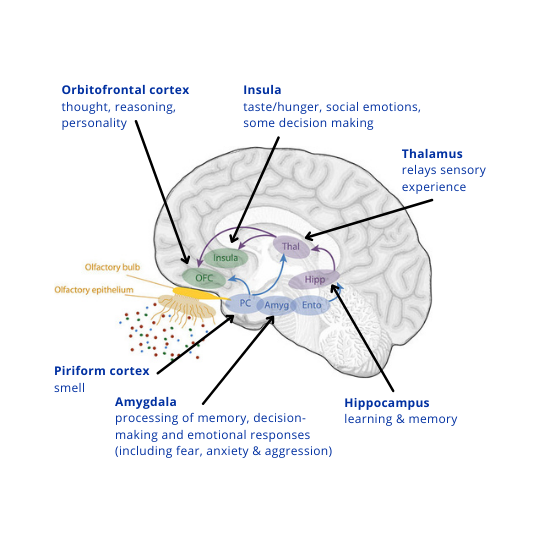 This important take-away was underlined in the webinar with our colleagues Professors Maria Larsson and Jonas Olofsson from the University of Stockholm on 6 April 2021.

But what does ‘top-down’ mean? Let’s investigate…

First, a reminder of how the sense of smell works. Odour molecules are taken up the nose, or through the throat when eating, and are received at the olfactory epithelium. Signals are then sent to the olfactory bulb and trigger responses in different parts of the brain that we recognise as smell.

So far so good. The work Maria and Jonas have been doing looks at this process at a deeper level. Maria explained that smells are interpreted as different types of memory or representations:

Olfactory knowledge - the things we learn, like how a lemon smells.

Autobiographical memories - instantly transport you back to a place and time.

From the findings of several studies, it appears that the brain ‘prepares’ to smell and calls on memory to generate expectations of the odour molecules that are about to be received. When we don’t smell what we expect, that triggers an instinctive response that makes us act. For example, you might walk into the kitchen ‘prepared’ to smell home cooking, but instead get the smell of burning and instantly react.

In fact, our experience of smell is largely recreating smells from our memory and experience in our brain, rather than the odour molecules around us.

It's all in the mind

This is illustrated by three experiments.

The art of wine: One is where a group of people believe they are tasting wine, but are actually drinking coloured water. In most cases, the drinkers will describe how they can smell the different aromas they expect to find in that wine, despite it being odourless.

Say cheese: Another study waves parmesan cheese under the nose of a blindfolded person. The first time it’s described as parmesan cheese and it's rated as pleasant. The same cheese is wafted again but described as vomit and unsurprisingly, that is rated as highly unpleasant. But it’s the same piece of cheese and the same odour molecules in each case. The person is just expecting something different.

What does this mean for smell training?

Now we see the role that the brain and memory play in smelling, we see how important it is to smell train ‘mindfully’. By concentrating on what you are smelling, perhaps supported by pictures, you are triggering the functions in the brain where smell happens.

This is why the type of odours you use for smell training is less important than visualising what you expect to smell. When you look for the smell of rose, it makes no difference whether it’s an essential oil, a single molecule or a floral blend. The act of preparing to smell rose is exercising all those areas in the brain that do the job of smelling.

Particularly in the case of virus-related smell loss, the ability to detect odour molecules is usually imparied because the receptor neurons in the nose have been damaged by the virus. The neurons are designed to repair themselves, and this healing process happens naturally over time.

Smell training supports the healing process, and by keeping the brain active, you are more likely to recognise the odour molecule when the damaged receptor neurons do begin to work again, and so maximise your ability to smell and taste. And as anyone who has lived with anosmia for any time will tell you, that first faint smell is truly joyful.

Traumatic brain injury is a common cause of smell loss, but smell training can help.

Introducing NoseWell, the online resource for COVID-19 patients to manage the recovery of smell and…

COVID-19 continues to dominate the headlines, and if membership of our COVID-19 facebook page is…

An Interview with Jonas Olafsson, University of Stockholm

How long will it take to feel better?